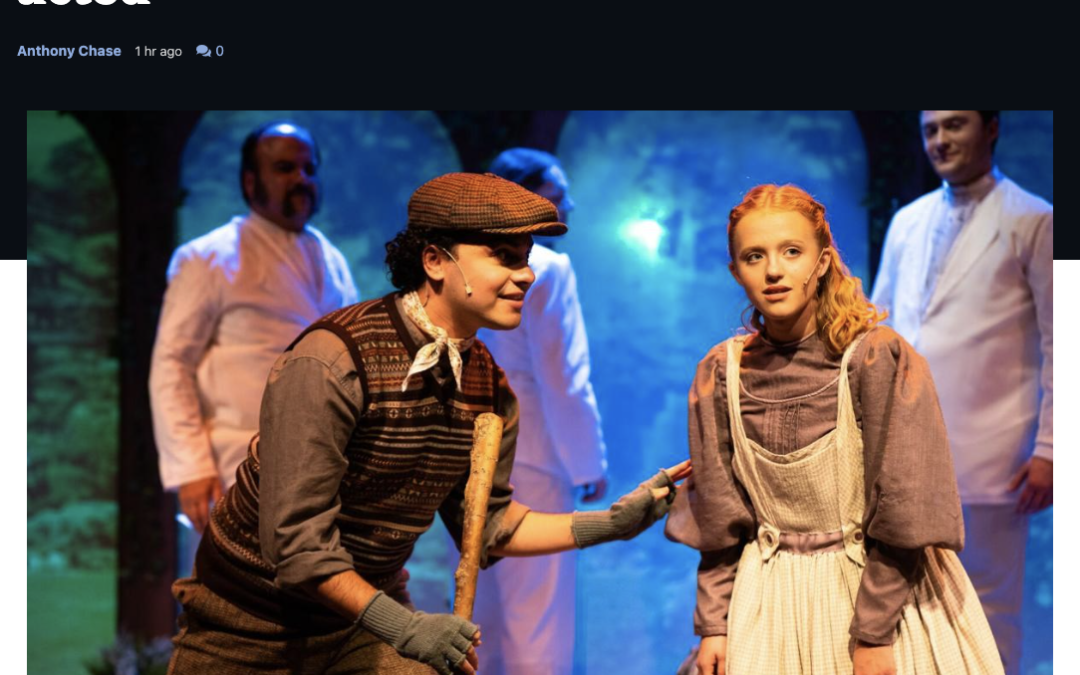 The Secret Garden: Spring Version” is full of mysteries, locked away: a garden, a boy, a heart. The 1991 musical by Marsha Norman and Lucy Simon is based on Frances Hodgson Burnett’s classic novel from 1911. The Second Generation Theatre production is a jewel: elegant, charming, exquisitely designed and expertly performed.

This is a 90-minute retelling of the story of Mary Lennox, a young English girl who is shipped off to an uncle she doesn’t know when her parents die in India. Uncle Archibald’s home in England is grand, but not happy. He is in mourning for his beloved wife, Lily, who died giving birth to their son, Colin. The boy is an invalid, confined to his room and forbidden to receive visitors. To make matters worse, Mary’s uncle can’t bear to look at her, because of her uncanny resemblance to her late Aunt Lily.

The secret garden of the title was Lily’s. In his grief, Archibald had it locked and abandoned when she died, but of course, nothing fascinates children more than something that is locked away, and the uncontainable desires of children propel the plot of this timeless story.

Since its inception, Second Generation Theatre has paid homage to the succeeding generations of Buffalo theater folk, so it is especially endearing that Mary Lennox is played by Ella Hinklin, the daughter of Buffalo theater veteran, Jenn Stafford, who also appears in the show, as a Scottish schoolmistress and in the ensemble. Young Ella clearly has inherited her mother’s formidable talent, as the teenager commands the stage with confidence and hits all the emotional notes of her character convincingly.

Directed and choreographed by Michael Oliver-Walline, with musical direction by Allan Paglia, the production is lovingly staged. An excellent cast sings strongly and performs Walline’s sophisticated choreography with grace.

Chris Cavanagh has undertaken light, sound, and scenery for the show. His clever design features a line of door panels that serve as screens for projections, or, when lit from behind, to facilitate shadow play. The circular playing area has levels and pivots around a fountain, allowing for marvelous fluidity in the staging.

Beautiful costumes designed by Jenna Damberger and built by her own “Houndstooth Costume Collective” are more meticulous than a production at this level should have any right to expect.

Among the young generation performers, Clark Garvey distinguished himself as Mary’s invalid cousin, bad-tempered Colin Craven. The role is endearingly comical, and his triumph over the adults in his world, not all of whom are exactly well-intentioned, is very satisfying.

The leaven in the dough of the play is Martha, the chambermaid from Yorkshire who encourages the children to explore their world and to be happy. Amy Jakiel is marvelous, playing the role with affable exuberance.

Joe Russi plays Martha’s brother Dickon, a youthful presence, but not a child. Having previously seen Russi as Emcee in “Cabaret” and as “Angel” in “Rent,” I checked the program to be sure I was seeing the same actor. He is convincingly transformed and entirely charismatic in the role of Mary’s playful co-conspirator.

Louis Colaiacovo is excellent as sad and conflicted Uncle Archibald, a man who is encouraged in his impulse to deny his better instincts. John Panepinto is similarly good as his brother, Dr. Neville Craven, a man of dubious motivation. Their rendition of “Lily’s Eyes” is a highlight.

Anne DeFazio as Mrs. Medlock, and John Kreuzer as the gardener, Ben Weatherstaff, give wonderfully enjoyable performances. She is the spooky ill-tempered housekeeper of many a gothic novel. He is the humble and world-weary but wise gardener who sees right past her forbidding exterior.

Kelly Copps is perfection as the ghost of Lily, a comforting maternal presence who sings angelically and moves ethereally.

Jenn Stafford, as always, milks every comic nuance from her character as Mrs. Winthrop, a school mistress who proves to be less clever than a fifth-grader.

Reductive newspaper star ratings of plays might have discouraged many from reading this review to the end, but for anyone still reading, understand that four stars, in this instance, means superb performances in a fully realized and artfully staged production of a lovely and moving play.

Anthony Chase for THE BUFFALO NEWS