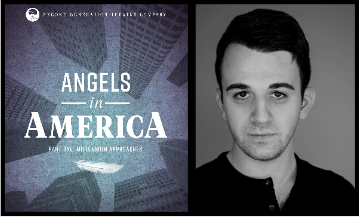 AJG: This is my first time working with Second Generation Theatre and I am very excited to work with a great cast and production team. I wasn’t familiar with the show at first. I was brought in to read for an audition and after having the chance to read the entire play, it felt like the kind of show where I could focus my acting chops and make some discoveries along the way as an actor. I think every actor looks for ways to expand upon their craft and find roles that go outside their comfort zone. The the show is like a “sandbox” where everyone can imagine, create, and play.

SGT: Do you have anything in common with Louis?

AJG: Louis and I share the same analytical mind except Louis is more about politics. I can see how he can come across like an ass, but looking deeper, he has a brain that’s too fast and often finds himself tripping over himself with his own thoughts. Everyone has a person like Louis in their life as a friend or someone they know. The crux of Louis’ problem is that he doesn’t have a strong emotional side so he often redirects and focuses on the area of his obsession “politics”, which acts as a sort of addiction.

SGT: Do you have a favorite character that isn’t yours?

AJG: It’s always hard to pick a favorite considering I like different characters for different reasons. I think Belize is a unique character for he combines seriousness with playfulness and you’re constantly engaged in what he says. It’s like you’re being insulted and praised at the same time. The way Dudney plays the character gives me the feeling of “that person you go to when you’re looking for life or relationship advice”. Belize will be brutally honest but will definitely use his charm.

SGT: Is there anyone that has been especially exciting to watch or share the stage with during ANGELS?

AJG: Overall working with everyone has been a great experience. It’s always exciting to work with talented actors that make you step up your game. I happen to share a lot of stage time with Ben (Prior), Steve (Joe), Dudney (Belize), and have some small exchanges with other actors. It’s the kind of show where pairing different characters will make great scenes and bring out the best in actors.