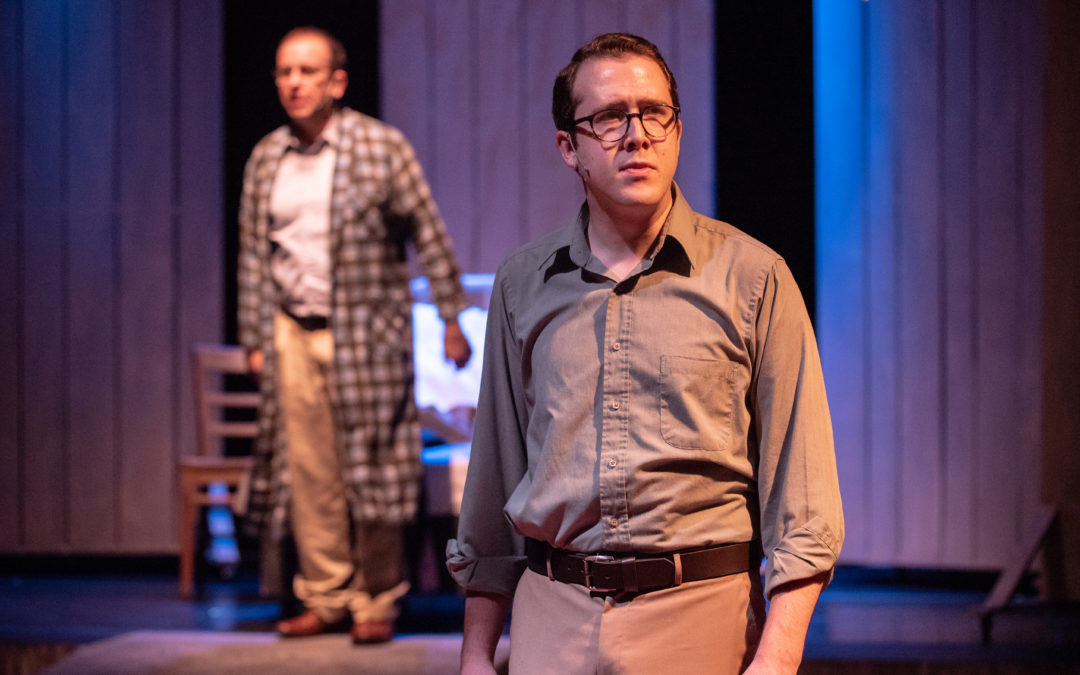 This is the story of Edward Bloom, an Alabama traveling salesman who compulsively spins tall tales about his life. These incredible yarns are filled with fantastic people and improbable events. In time, his only child, Will, becomes frustrated with his father’s elusiveness about his true past, and resentful and suspicious of his father’s frequent absences.

This is a story of estrangement and reconciliation between father and son.

I liked the original production, which I first saw in Chicago previous to its Broadway run. The story was fresh. The characters were complex and compelling.

It was clear, however, that the lavish Broadway production smothered its intimate story under mountains of stage magic and scenic artistry. The show closed in less than three months.

By contrast, the Second Generation production, now at Shea’s Smith Theatre, bursts onto the stage with playful imagination, simplicity and love. The Smith Theatre has been reconfigured with seats wrapped around the audience on three sides, giving the space added intimacy.

Director/choreographer Michael Walline has approached the material with originality. In the opening prologue, his introduction of the characters that inhabit Bloom’s imaginary world is thrilling. A witch, a mermaid, a giant, a fisherman, a cheerleader and childhood friends quite literally leap into the action, setting the tone for everything to come.

The fanciful landscape of Bloom’s mind has been conjured with delightful invention by set designer Chris Cavanagh; video and projection design by Brian Milbrand; costumes by Jess Wegrzyn; and props by Diane Jones. It all seems to have been propelled from Bloom’s singular imagination by hand.

Effects that stole the show on Broadway – and not in a good way – here augment it. Broadway’s enormous dancing elephants are adorably replaced by nothing more than parasols, a gray sheet and some actors.  The supernatural mystery of a witch is established with the abrupt ripple of a handheld fans opening in unison. Themes and locations are whimsically suggested by Milbrand’s superior videography.

The witch, played by Victoria Perez, is entirely reconceived, not as a Broadway vamp, but as a Spanish lady of mystery, proffering Bloom’s future in her handheld crystal ball – an LED lamp that changes colors.  So simple. So magical. (And it doesn’t hurt that Perez is bewitchingly fabulous.)

Broadway assembled a cast of stars to play the Bloom family: Norbert Leo Butz as Edward, Bobby Steggert as Will and lovely Kate Baldwin as Susan. They were perfection, and yet the tension, wrought by the powerful alchemy of love and estrangement, feels far more potent at the Smith Theatre. With the proportions of the show brought down to human scale, the conflict between Edward and Will becomes more equally balanced, and the stakes seem more personal.

Lou Colaiacovo travels the journey of Edward’s life with irresistible gregariousness, while still showing us the qualities that so frustrate his son.

Ricky Needham embodies the difficult role of bitter Will with confidence, compassion, and a strong singing voice, proving that he can carry a show in the process.

As Sandra, Michele Marie Roberts provides several of the evening’s emotional highlights – especially in her solo numbers. Here is a woman who loves her husband unreservedly, and who needs her son to recognize the magic in the man.

Together, the three actors evoke a powerful bond of love and unresolved conflict.

While watching “Big Fish” I predict that you will experience a strong impulse to reach out to characters who are physically within your reach, but purely imaginary inventions. I further prophesize that people and events from your own life will swirl uncontrollably in your memory as you leave the theater. This is a special evening, and Second Generation is emerging as major player on the Buffalo theater landscape.